Smartwatches have firmly established themselves into two camps and if you’ve chosen the Android life, there is a very slim chance that you haven’t encountered a Samsung Galaxy wearable. The go-to choice for well-heeled Android suits, the Galaxy range has always been high on style and versatility, thanks to its iconic round dial that instantly appeases purists. The fifth generation makes subtle improvements that are more iterative than revolutionary, but there is one major difference. The mechanical rotating bezel around the perimeter has been replaced with a touch-sensitive surface. Say what?

If you’re moving on from a traditional analog watch, Samsung has always tried to make the transition a bit more...bearable. The 45mm dial might be large for most wrists, but if you’re used to wearing a chronometer or even a G-Shock, you won’t find the size daunting. Beautifully finished in titanium, the Pro gets an upgrade over the aluminum of the regular Watch 5 and it not just shows, but also feels more durable. It took casual nicks and brushes against doors, counters and weights (while in the gym) pretty well, with no signs of being abused.

Even the magnetic clasp band is great on fit, although it takes a bit of trial and error to adjust it to your size. Once done, it’s easy to slip on and off. What does get in the way is the rather thick body of the watch core. Admittedly, it has a large 590mAh battery that gives it solid battery life. While it weighs less than a stainless steel Apple Watch S8, its just the way the bulk of the weight sits on top of your wrist that makes it “feel” heavier. There’s no doubt that it looks premium, refined and contemporary with its clean design and material choices, but it’s not something I could wear for extended periods of time without getting my wrist baked or wanting to air it out.

If you’ve liked the mechanical bezels of the past Galaxy Watch iterations, you will sorely miss it, for sure. The touch gesture ring which sits right under the raised lip of the fixed bezel now is not as precise as a mechanical indent, as expected, but it also blocks part of the screen as your finger tries to get to the desired menu. But, it does have an upside to it too. The lack of any moving part means tighter seals and less dust and water ingress, so for a “pro” watch like the Watch 5, it actually is a step in the right direction, like it or not.

The two side buttons are superbly built, with one acting like a home button which can be customised for a double press, or you could long press it to summon Bixby or power the watch off. The second button is a back key or recent apps view, depending on your selection. The underside of the Watch 5 Pro is also of a different curvature now, aiding in closer contact to the skin, hence making for more accurate readings from the sensors. Along with improved electrical and optical heart rate sensors, there’s also the Bioelectrical Impedance Analysis sensor that skilfully measures your body fat percentage, BMI, and skeletal muscle. It will even let you set goals if the initial readings don’t meet your Insta followers’ approval.  There’s also a new skin temperature sensor that Samsung is keeping under wraps until an update to activate it is released later.

Built on Android Wear OS, the Watch 5 Pro UX/UI is still very Samsung in operation. Some apps can only be downloaded from Samsung’s own store and require you to go through various permissions and setup can be fiddly. The overall navigation around the watch is pretty easy though and there are plenty of customization options, as you’d expect. Third-party watch faces are easily integrated and it’s one of Galaxy Watch’s biggest strengths to be able to blend in with any attire or event. The selection of native watch faces is limited compared to the Apple Watch though.

This brings me to the processor, strangely. Yes, it does suffice for most of the tasks, but even making simple changes to watch face complications takes a few seconds to take effect. The rest of the UI is largely smooth and lag-free and nothing will make you want to crush it to bits. I’m still on the fence regarding the responsiveness of the display to get up to full brightness at the turn of the wrist. It just didn’t work with a gentle twist most of the time and the outdoor visibility of the Always On display remains dimmer than an Apple Watch S8.

The “Pro” moniker obviously indicates to the bigger size and more rugged build compared to the standard edition, but the software changes are limited to GPS-related activities like cycling and hiking. It can now accept GPX files from other apps like Strava and give you turn-by-turn navigation prompts and even includes Track Back, a feature that traces your journey and helps you get back to your starting point, even if you’re off the grid. Where the Samsung scores well are workouts and activities that offer something to everyone, even if you’re stuck at your desk. And all those sensors are extremely accurate in keeping a count of steps, calories, stress levels, BPM, resting heart rate and even ECG. Getting your body composition is a simple affair too and whether trustworthy or not, it does give you an estimation of how far you stand from the Olympic goalpost.

Sleep tracking has always been one of the Galaxy Watch’s strengths and now with sleep stages and sleep coaching, Samsung seems adamant about ending your bad habits. Divided into Awake, REM, Light and Deep, it’s a detailed analysis of how much time you spent in each stage and if you’re not bothered by pointing a Samsung phone towards your mug all night, it’ll even give you snoring data! Now if only the Watch 5 Pro was sleeker and more conducive to going to bed with….

As a smartwatch in 2022, the Watch 5 Pro is adept at doubling as a camera remote and as I discovered, with the Samsung Galaxy Z Flip 4 propped up in Flex mode, it came in handy for taking selfies or group pics from a distance. Then there is the usual assortment of conveniences like music storage on board so you can run without a phone on you, SpO2 monitoring, message notifications with a proper reply mechanism (including dictation, swyping or scribbling) and the list can be pretty long if you want to combine the Play Store and Samsung stores selections.

Battery life was a consistent 2-3 days but if you don’t need the always-on feature, you could extend it beyond 4 days too! If you’re a power user and want to throw in GPS, workouts and sleep tracking, you could even exhaust it in a day and a half.

Using their inherent expertise with displays, the 45mm Samsung Galaxy Watch 5 Pro is certainly desirable and accomplished. It does almost everything the Apple Watch does and then even adds its own flex regarding battery life. But, it also doesn’t collate the vast data it collects as slickly as WatchOS nor does it make you forget that you’re wearing something on your wrist, the way an Apple Watch just blends in. If you want to stand out from the crowd and are firmly entrenched in the Android ecosystem, this is the best there is.

Packed with useable features and accurate sensors, but even the great looks and build can’t take away from its bulk. 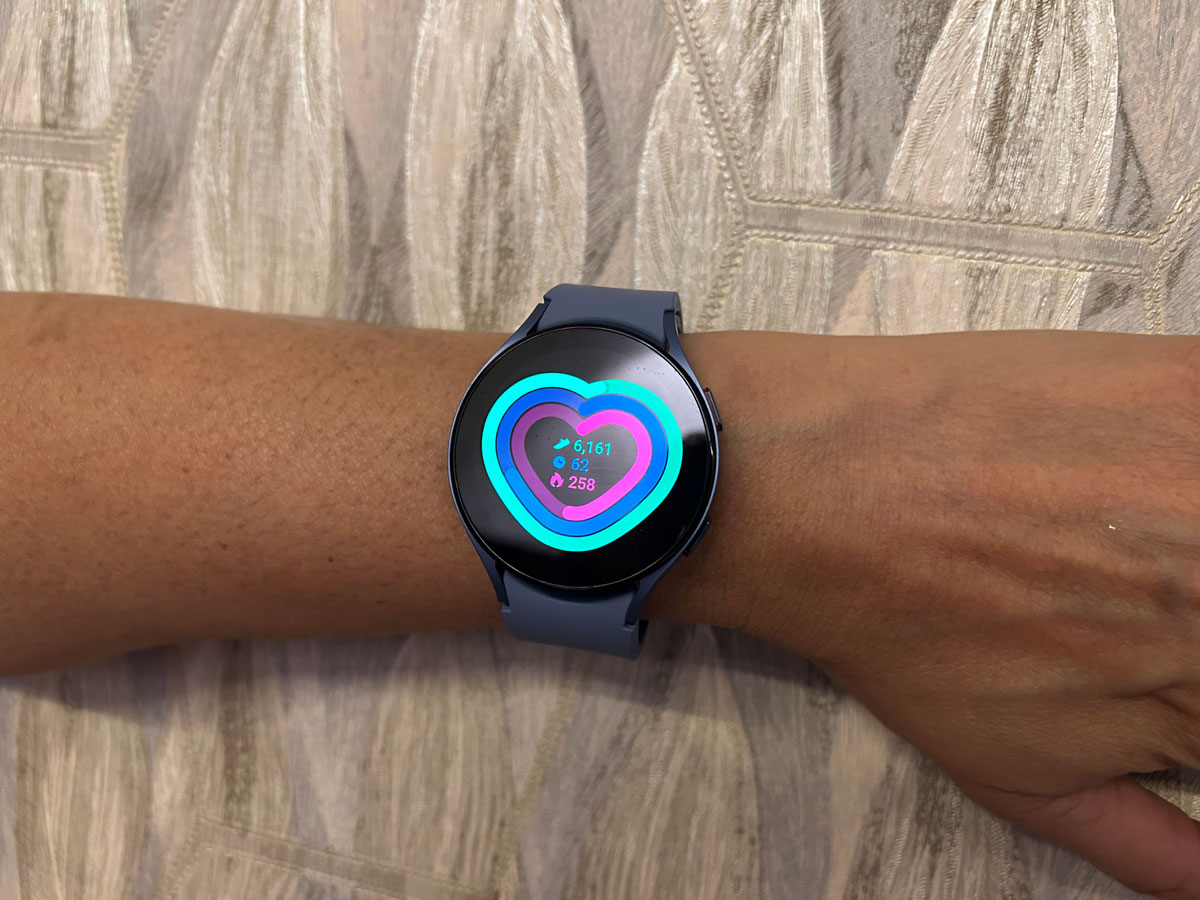 Very tempting to not Pro here 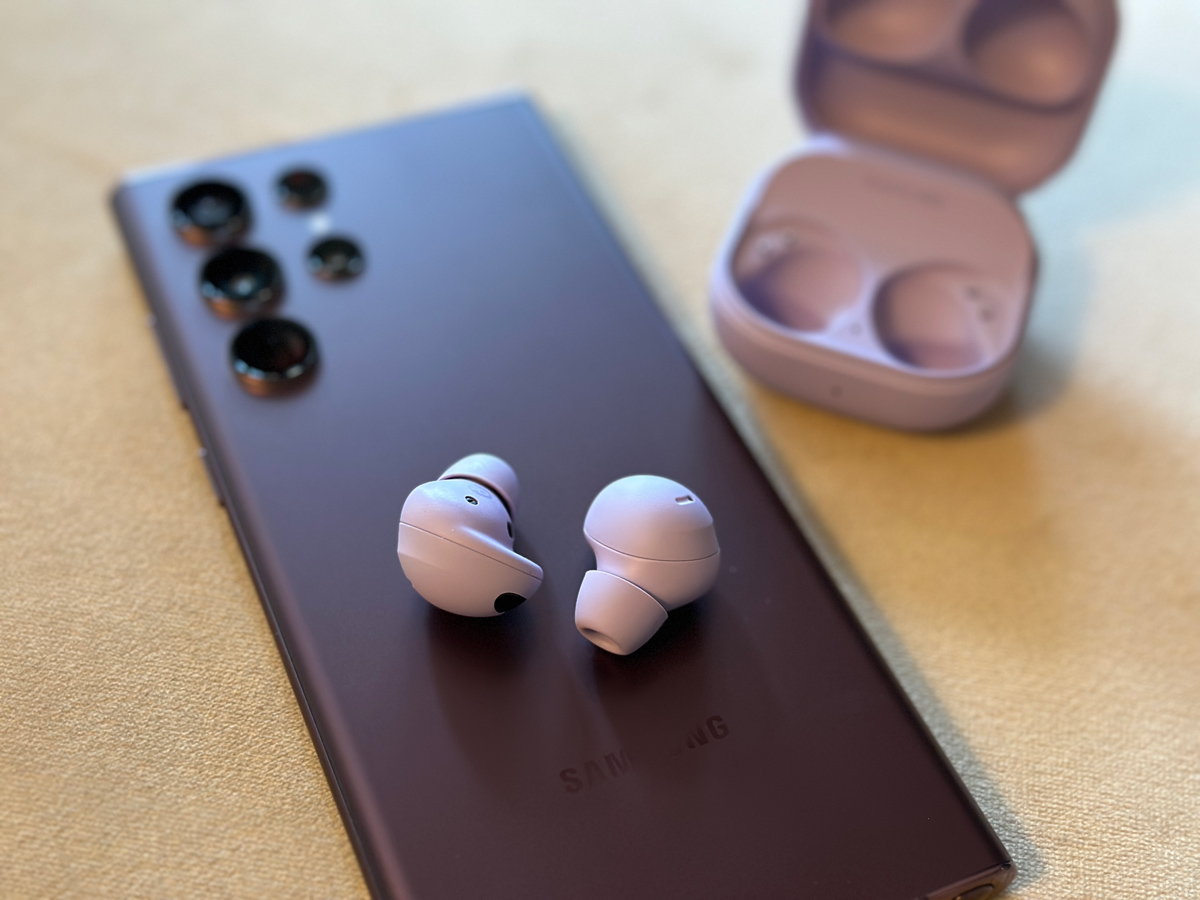 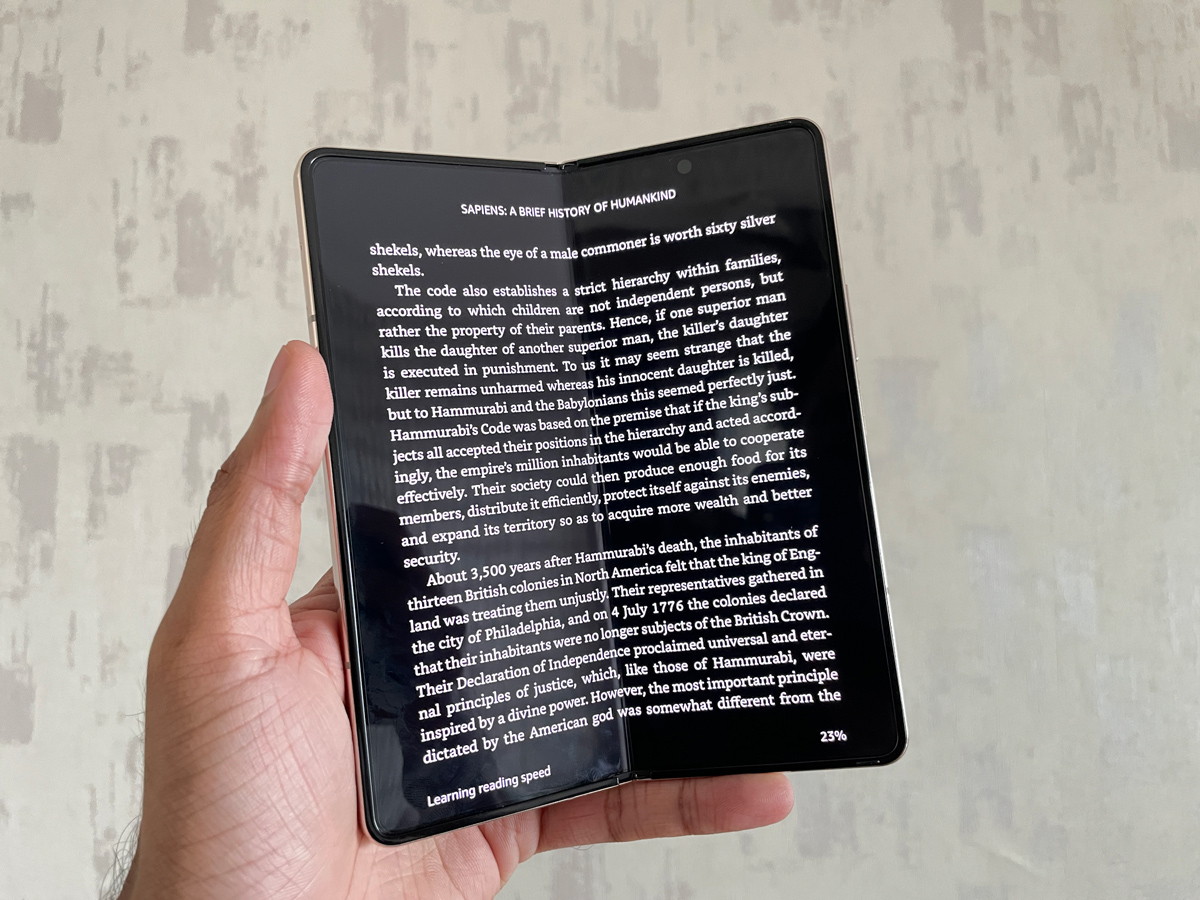 In a galaxy folded behind the first